Boko Haram jihadists attack a farm in Jere, Borno State, Nigeria, killing at least 43 people. The massacre reportedly occurred during the morning, when most workers were harvesting rice.

The attack, at Kwashebe Zamarmari in the Jere local government area, happened late morning local time as the workers were harvesting rice, according to a village leader, a local fighter with the Zamarmari group and a police source.

Boko Haram and Islamic State West Africa Province are both active in northeast Nigeria, where insurgency has reigned for a decade.

Food prices in Nigeria have risen substantially this year, in part due to insecurity in food-producing areas, according to politicians. Flooding in northwest Nigeria earlier this year also destroyed thousands of hectares of rice paddy.

Suspected Boko Haram members, yesterday, slaughtered 43 farmers at a rice plantation in Borno State. The insurgents were also said to have destroyed the rice plantation after slaughtering all the farmers in yet another major attack in the state.

President Muhammadu Buhari yesterday reacted swiftly to the reported slaughter of the farmers. He expressed grief over the killing of farmers on rice fields at Zabarmari, in Jere Local Government of Borno State, describing the terrorist killings as insane. 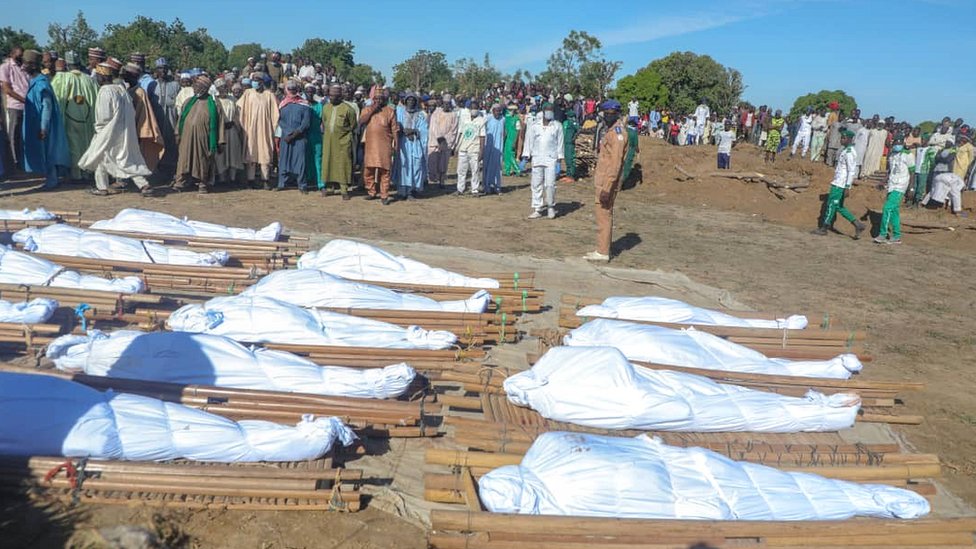 In the president’s verified twitter handle @MBuhari, the president said: “I condemn the killing of our hardworking farmers by terrorists in Borno State. The entire country is hurt by these senseless killings. My thoughts are with their families in this time of grief. May their souls Rest In Peace.”

President Buhari said the government had given all the needed support to the armed forces “to take all necessary steps to protect the country’s population and its territory.”

Also reacting yesterday to the dastardly slaughter of 43 farmers, Amnesty International in a tweet condemned the targeting of civilians, saying it shows the group’s contempt for human life.

The body, therefore, urged Boko Haram to “end its campaign of vicious and unlawful killings of civilians”.

Even though details were still sketchy yesterday night, the attack triggered anger in several communities fearful of the worsening insecurity in the state and the country generally. Nigerians vented their anger on social media condemning the government for its apparent failure to secure lives of Nigerians.

An apparently distraught governor of the state, Prof. Babagana Zulum, has however asked to see the corpses of the farmers before they were committed to mother earth today.

According to a source, the farmers had gone to the farm in Kwashabe village in Zabarmari district of Jere Local Government Area to harvest their rice before they met their untimely death.

The source, a security official, who preferred anonymity, stated that the insurgents in their numbers attacked the farmers on the farm at about 4pm, subdued and slaughtered them all.

“It is unfortunate that Boko Haram have killed 42 farmers in Kwashabe village, in Zabarmari part of Jere Local Government. It subdued farmers, who were harvesting rice, slaughtered all of them and razed their farm, destroying their rice,” he said.

According to the source, who obliged information at about 10.pm last night, said, “As I am speaking to you, the corpses of the farmers are lying in the farm as it is night and no one can bury them now.

“The Governor, Prof. Babagana Zulum, who was apparently shaken by the sad event, has equally instructed that he would like to see the corpses before they are buried.”

As at the time of filing this report, both the military and the police could not officially be reached last night for confirmation. Messages sent to the spokespersons of the military and police were not responded to.